We are marching with the sheep! This month’s spread is inspired by sleep deprivation and my son’s pajamas.

I’ve realized my says are basically the same and didn’t really need a weekly spread. I’m trying out this weekly to-do and see if it works. This is also the first time that I am using a tracker! Let me know what you think!

I can’t believe it’s almost the end of February and I actually made a layout! It’s been so busy with the baby that every day is a blur. I don’t feel like it even need any weekly spreads because the routine is pretty much the same. This month was full of events with friends and also working on the babies routine. He was born during the year of the dog and I am in love with my little guy. hence, the theme was “puppy love” it’s February and you have to have some type of love theme. this also marks my one year anniversary of starting my bullet journal. February was my first month that I did and I spelled February wrong. This layout was not my best but I hope in the next coming months I improve. 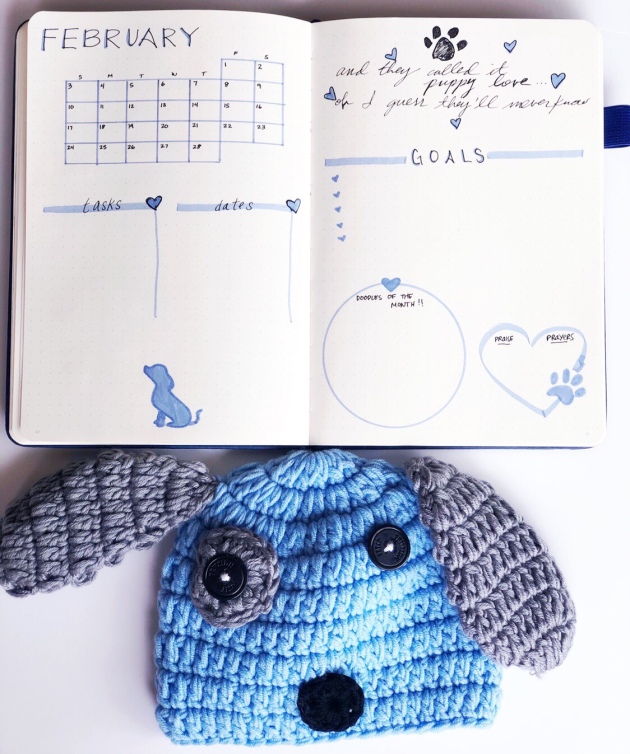 It’s almost the end of January and I finally completed my January spread. It’s been a busy couple of weeks, mostly because of the newborn. I am hoping that he sleeps more and then I’ll be able to do more things. I am actually still working on my set up for 2019. I am excited to see what the bullet journal journey takes on this year. I realize that because of my busy schedule that I may not be able to actually draw or doodle. I have purchased a handful of stickers that will hopefully make me efficient in having my bullet journal monthly spreads on time.

However, I do still want to work on getting better at drawing. Therefore, I used my monthly spread to have a area where I would need to actually do it all. I hope this will continue on for the year and it would be nice to see how my drawing skills improve. I am a very basic and inexperienced person when it comes to drawing. I describe myself as a creative person but I cannot drive to save my life sometimes.

Hope everyone is having a great week!

It’s December and I’m excited for the New Year. I haven’t even started on my 2019 bullet journal yet but I have some ideas. I also ordered a million stickers online and I am waiting for them to be delivered.

I really, really want to step up my blog next year and use my bullet journal more efficiently. BUT, at times, I’m just sooo lazy. Next year is going to be very different with the baby coming. I had this blog as a release and escape from residency so I’m hoping it’ll be become a little vacation from the stress of motherhood. I am also hoping to put more helpful information on here!

For example, I just got the Muji acrylic drawer during Black Friday as I’ve seen how the Stabilo markets are displayed on it BUT it didn’t fit and so I then also bought the Container store version. I’ll try to write a review post about my experience.

Here’s the December Bujo! I went with a blue theme! The gel white pens are my new favorite things! 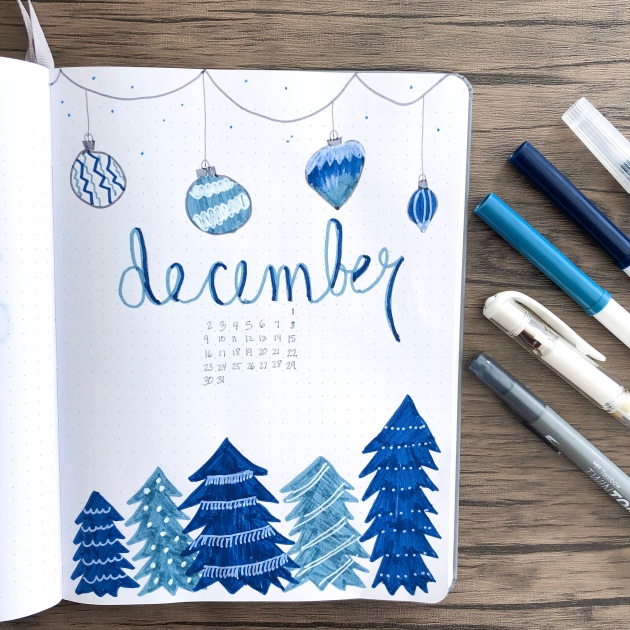 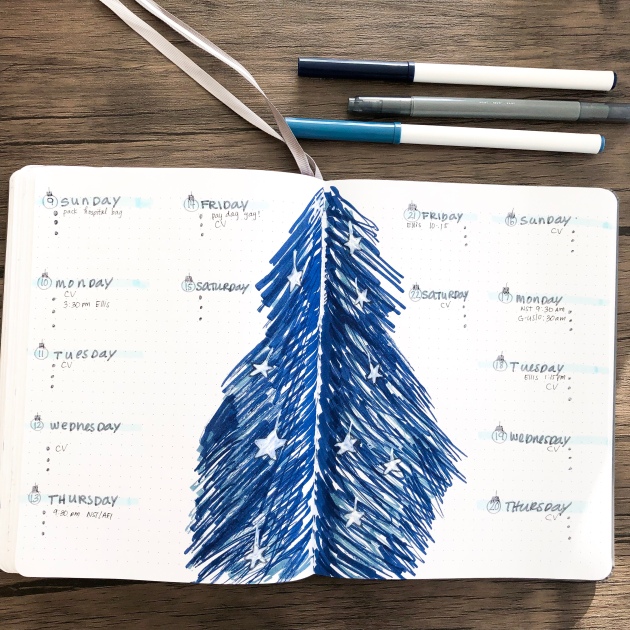 I just finished watching the first eight episodes of season 5 in the past three days. It was more entertaining than I was expecting. HTGAWM is in its 5th season and sometimes that could be the show’s expiration date.

:::STOP READING IF YOU WAN’T TO AVOID SPOILERS::::

Season 4 ended with the mystery of the new kid. Season 5 threw us some curve balls. Could it be Bonnie’s? We find out it’s not. Although, I don’t truly believe her sister’s story. I thought he might be related to Wes or is Gabriel actually Annalise’s kid? Did something happen with the adoption? We find out at the end that he is Sam’s son from Sam’s first marriage. A Sam story-line is back again. He even showed up at the fall finale. This guy…he gets killed and his house burns down, but the writers still find a way to write him in.

What is Gabriel’s motive? Is he trying to learn from the best? Is he avenging his father’s death? Why did Annalise have SUCH a big reaction to know his existence? And WHO ON EARTH has Frank been talking to on the phone? At the end of season 4, he is on the phone and says something like, “the kid is here.” It doesn’t seem to be Annalise or Bonnie that he was on the phone with as they found out about him much later in Season 5.

Bonnie. Bonnie. Bonnie. This character is so complex. She can be so weak but then be so murderous. She killed Rebekah. She killed her dying (almost) fiance in the snow. Suffocation seems to be her forte. I feel like her story line can go on for miles. Who knew she had a sister who is alive? Will we be seeing her sister and more of her back story in the Spring? I’m on the fence whether I believe the D.A. I mean, he seems like he was telling the truth but in true HTGAWM fashion, the D.A. usually dies.

On another note…I LOVED Oliver and Connor’s wedding! Oliver wore a barong and there were so many Filipino-esque things in the wedding. My little Filipino heart was so happy. They even had lumpia in one of the episodes. I love lumpia. The writers did throw some worry to the fans as we thought Oliver might be the person bleeding in the snow. Nope! He just went to talk to his dad on the phone and changed outfits to sing a love song.

I’m excited for the Spring episodes to come. Here’s to hoping all my questions are answered!

Oh hiiii November! I caved this month. I used…dun, dun, dun…STICKERS. The beginning of November was a bit of a whirlwind and I had bought these stickers for my baby shower decorations. I had some left over and they were cute so I decide to use them for my November spread. My baby shower was galaxy-star-moon theme and I wanted to reflect that in my bullet journal.

I also got a set of Tombow Pastel Dual Brush Pens! They were on SUPER sale at Michaels because Michaels had a 60 percent off coupon. Honestly, if you want to buy something at Michaels, check for coupons. They usually have 40 percent but that was the first time I saw 60 percent. AAAA–mazing.

I am also a bi-weekly spread kind of person so I’m totally loving the weekly spread. I also attempted to blend the Tombows. It looks nice in the picture, but…there was some paper breakage. I need to watch more tutorials on how to blend these markers.

Anyone have any pointers on blending? 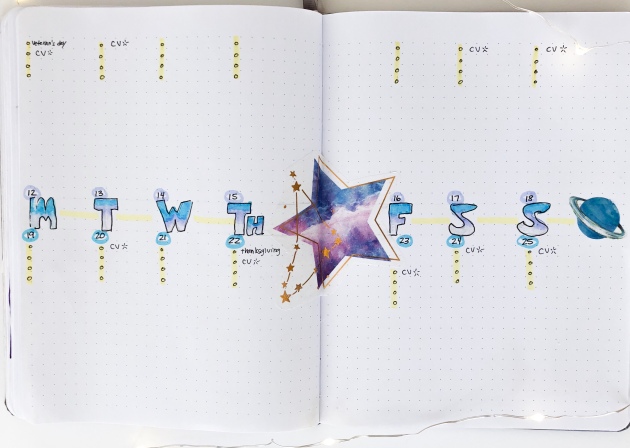 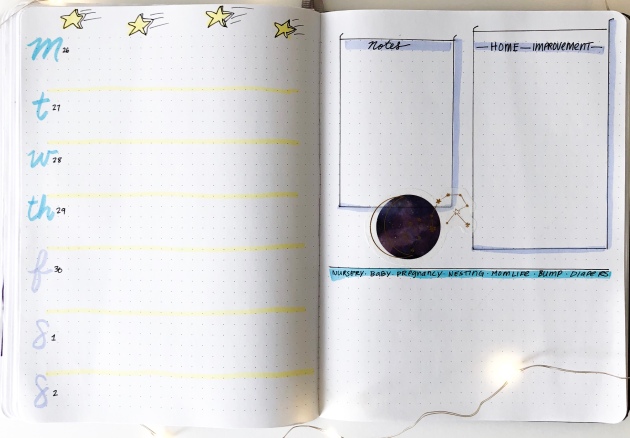 I went to a makeup event this past weekend and it was amazing! It was my first time and it was also Sephora’s first hosted event. We got A LOT of samples and I’ve been wanting to organize my makeup since the big move. I literally have no clue what makeup I own and need, which this is just in time for Sephora’s sale.

I’d just like to say that lettering is so hard! There’s so many beautiful spreads and lettering videos on IG and YT that I feel it will take me forever to get to that level. On the other hand, I don’t really mind if I’ll ever reach that level but as long as I’m making progress and enjoying this hobby. It definitely beats sleeping and working in the hospital!

I’m excited to fill this out and will try to do one for skin care, too!

I am DONE with taking Boards, a test I have been somewhat studying 7 years for! 7 years?! We don’t get the results until much later but I’m just ecstatic to be done. I started my bullet journal spread for October after Boards since most of my time was dedicated to studying. I could not pass doing a spread for my birthday month. I followed the illustrations from Drawsocute from Youtube and my cake turned out okayyyy. It’s not the best but at least I tried. I also kept the month and weekly spreads to a minimum. I basically need a reset and a new organizing mind for the next couple of months.

I’m looking for a new bullet journal. I have a heavy hand so I want thick pages with minimal ghosting and bleeding. I also have been playing around with the tombows dual brush pens and cannot figure out how to use them. Maybe that should be my goal for next month? I have so many ideas of ways to improve my bullet journal! 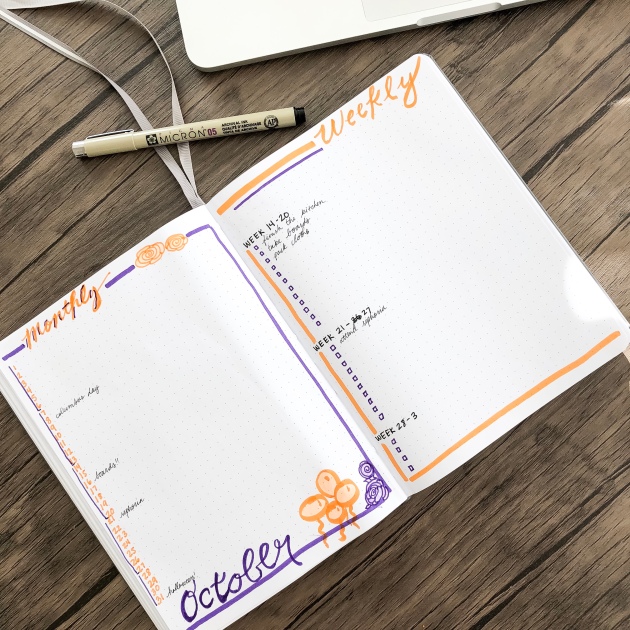 I hope everyone had a wonderful Labor Day Weekend! I had a very long weekend and I start another stretch of work starting today. I was able to make my September spread and post it on instagram before the weekend started. I had an idea of drawing a fashion illustration, similar to a fashion sketch. I was drawing…and drawing…and drawing…and it was just not meeting up to par. I just gave up since I was short in time and settled for New York’s skyline. September reminds me of NY Fashion Week and I love NY. The NY skyline will have to do for now. Next, I just made the rest of the layouts as minimal and simple as possible due to time constraints.

I plan to improve my bullet journaling “skills” after mid October when I’m done with my boards. I Just want to pass and be done with it! 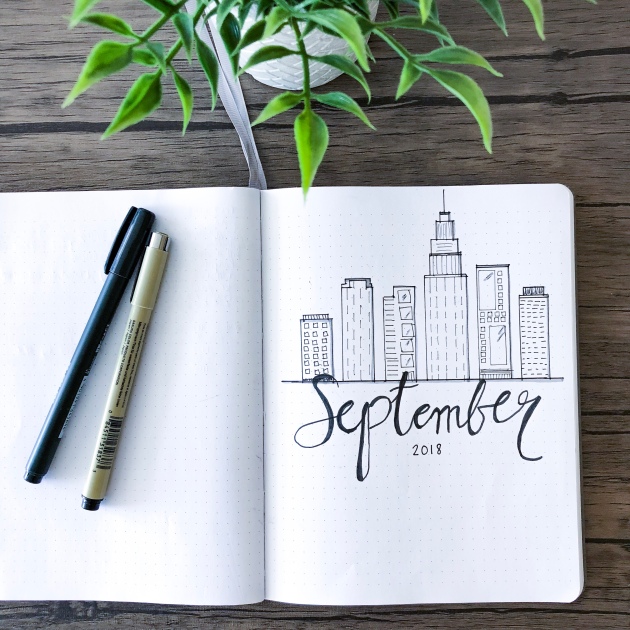 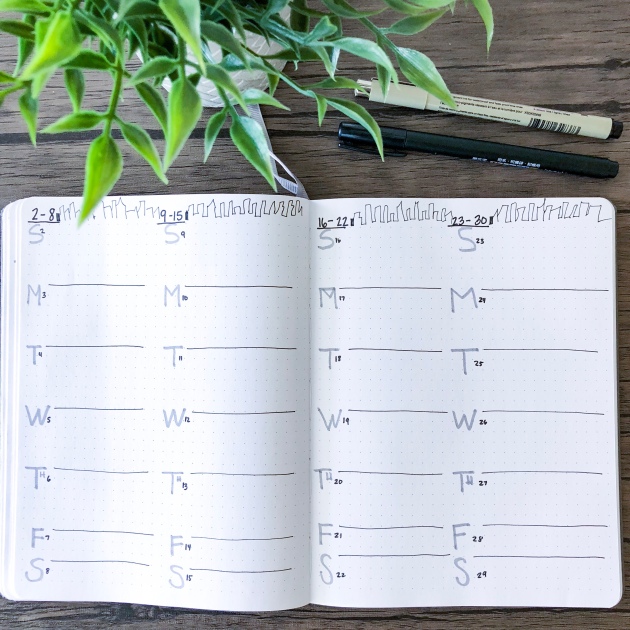 This episode seemed so quick and less lull moments than previous ones. Overall, I enjoyed the finale episode of season 5. The ending really opened doors to something new … or something old. It could totally be like first season where they land in a new planet and meet the people living there. They can fight like all the past seasons. I hope they do something different though. Maybe they develop SUPER POWERS. That would be interesting.

I honestly feel like Bellamy and Clarke and just good friends, but if the series ever does a romance between them, I support this! Rest in peace, parents of Jordan! Thanks for your sacrifice. I also felt like if THIS episode was the season finale, then I’d totally be satisfied. According to this, the show didn’t know if they were going to get a season 6! They had to write for show ending or show continuing! Clap. Clap. Clap. Good job!

I just hope when they do plan to end the series, that it’ll be a good ending because the TVD, Vampire Diaries, PLL, and True Blood were NOT.

Things to be determined: